A study on the new views of the Moon titled “Cryogeomorphic Characterization of Shadowed Regions in the Artemis Exploration Zone“has been published in the journal Geophysical Research Letters.

Researchers from ETH Zurich have used artificial intelligence (AI) to assist them in viewing parts of the Moon permanently in shadow. Their study looks at the south polar region, which contains numerous impact craters that never receive sunlight and are always shadowed. Inside these craters, the temperature drops to between about -170 degrees Celsius (-274 degrees Fahrenheit) and -240 degrees Celsius (-400 degrees Fahrenheit), nearing absolute zero.

The cold temperatures mean ice could be found in the craters, as water vapor freezes and becomes trapped inside the crater. Other volatile substances could also form solids and ice throughout the crater, providing astronauts with a potential water source or source for chemicals that may be used as rocket fuel or applications like radiation shielding. 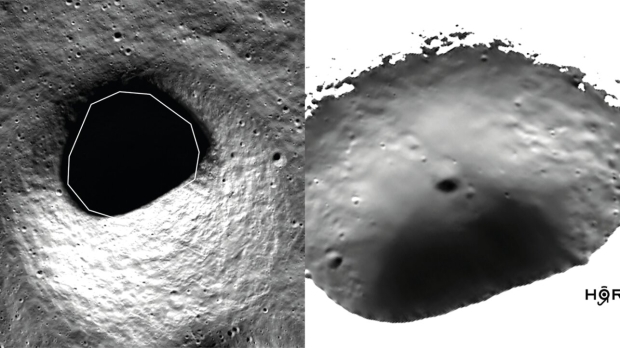 With help from NASA’s Lunar Reconnaissance Orbiter, the researchers have managed to peer inside the craters. The orbiter’s camera has managed to capture some photons as they bounced into the shadowed regions from nearby mountains on the Moon and crater walls, and AI has been used to analyze what was captured. Despite the existence of water ice being confirmed on the Moon by other instruments, none could be seen in the craters by the satellite.

“There is no evidence of pure surface ice within the shadowed areas, implying that any ice must be mixed with lunar soil or lie underneath the surface,” said study lead author Valentin Bickel.

You can read more from the study here.