CUPERTINO, California: Apple’s first live launch event since the start of the pandemic saw a host of major new products being unveiled.

A new iPhone generation split across four models, a new set of AirPods Pro and three new Apple Watches were among the highlights of the company’s annual September event.

A new iPhone 14 with emergency SOS

Emergency messages by satellite and an always-on display are among the key features set to arrive on Apple’s Pro version of the iPhone 14.

The new phones allow the user to send an emergency message via satellite, a potentially life-saving feature in instances where there is no mobile phone reception.

The feature is also ground-breaking for smartphones, as until now, you needed a special phones with larger antenna for this to work. To make it possible, Apple has integrated an in-house system for connecting to satellites into the iPhone 14 Pro models.

However, the connection remains a technical challenge, as the company emphasized at the Apple launch event on Sept 7. For the feature to work, the iPhone must be pointed directly at the satellite, and the transmission can take several seconds or even several minutes.

Since the satellites are not visible to the naked eye, users will get help aligning the devices with a graphic on their screen.

The feature will initially only be available in the US and Canada and will be free for iPhone 14 buyers for the first two years.

Alongside the Pro and Pro Max version with bumped-up hardware specs, Apple has also announced the regular 14 and 14 Plus iPhones, which cost less but don’t feature a zoom lens in the camera.

In a radical move, the US versions of the iPhone 14 will also not have a slot for a physical SIM card at all, instead relying entirely on a reprogrammable eSIM.

Always we arrive on iPhones

In the more expensive Pro models of the iPhone 14, the display can now also stay on all the time. This creates new possibilities, for example, for applications on the home screen that display information in real time – such as live scores at sporting events.

While the always on display had long been around on many Android phones with OLED screens, notably Samsung Galaxy devices, it has been a requested feature for Apple users in recent years.

On Pro iPhones, Apple has also reduced its notoriously large notch area, which made room for the selfie camera and FaceID sensor. Instead of the large cutout previously at the top of the phone’s screen, there is now a smaller pill-shape. 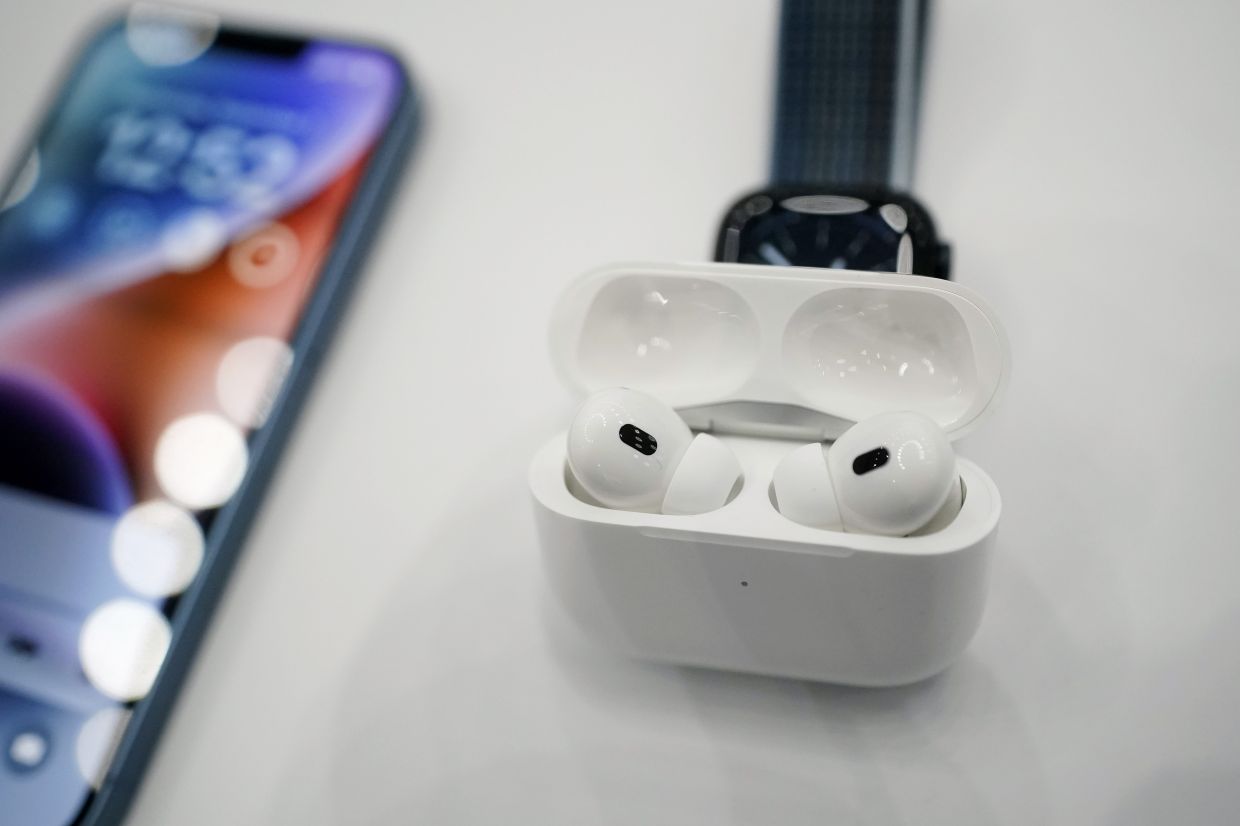 New second-generation AirPods Pro are on display at an Apple event on the campus of Apple’s headquarters in Cupertino, California. —PA

There’s also a 48-megapixel sensor in the new camera system, which is supposed to provide better pictures in difficult lighting conditions.

Pre-orders start Sept 16 while local availability starts on Sept 23 for all models except for the iPhone 14 Plus version, which Apple says will hit Malaysian stores on Oct 7.

Alongside the new iPhones, Apple also unveiled a new Apple Watch Ultra, a high-end version of its smartwatch designed to run for 36 hours without charging thanks to a larger battery – and up to 60 hours with power-saving settings activated.

All versions of the watch have LTE built in by default. An additional large button is supposed to be easy to operate even with gloves on, which helps divers, for example. Apple also says the watch has a more robust design to prevent scratches and cracks during sports. A person holds an Apple Watch Ultra at an Apple event on the campus of Apple’s headquarters in Cupertino, California, Sept 7, 2022. — AP

Among other things, the Watch recognizes a frontal or side impact as well as a rollover. The Watch also evaluates ambient noise for this purpose.

Apple’s watches with LTE will also support roaming for the first time. Until now, connectivity without a connected iPhone was limited to national borders.

With the new Airpods Pro, Apple is updating the more expensive model of its wireless earbuds, launched in 2019 to much acclaim.

New features include what the tech giant says is twice the ambient noise cancellation and the ability to change the volume with swipe gestures on the earbuds.

Despite intense competition, Apple has become a major player in the wireless earphone market, and its various AirPods models have become the default for iPhone owners.

Together with its own brand Beats, Apple sold 17.5 million devices in the last quarter alone, according to Canalys calculations, and achieved a market share of almost 28%. – dpa