From an outsider’s view, Annie January (Erin Moriarty), better known as Starlight, has achieved everything she’s set out to do. Not only is she a member of the most powerful superhero team on Earth, The Seven, she’s been named co-captain by Stan Edgar (Giancarlo Esposito), the CEO of the company that owns the team, Vought International.

In the third season of “The Boys,” Stan assures her that this should put her on equal footing with Homelander, (Antony Starr), The Seven’s invincible leader, who happens to be a psychopath. The only force keeping Homelander in check is fan worship: as long as he feels loved, he has no reason to subjugate humanity.

That shouldn’t be a problem. Vought has insinuated The Seven into every corner of American life. Its heroes’ faces are on food packaging, toys, clothing, everywhere you look. They star in TV shows and movies and croon hit pop anthems.

Through them, Vought influences government policy and is gunning for control over the military. What does Annie have to do with any of this? That’s the question she’s been asking herself since she joined the squad, hoping to use her position to be a true hero and help the average person. But from the start, she’s been harmed, baited, and gaslit.

Annie never got real justice after she told the world that a fellow team member sexually assaulted her. Her assailant, The Deep (Chace Crawford), was fired. Maybe she could have quit then. Instead, Vought transformed her trauma into a marketing opportunity. It treated The Deep’s supposed redemption arc the same way. Now that he’s been reinstated on the team by Homelander, it is increasingly clear that whatever power Annie once had was compromised away some time ago.

Currently Annie’s life depends on her ability to persuasively cosplay Starlight instead of wielding her might to protect and serve. Behold the trap of selling out, the selfishness that fuels capitalism. The concept’s meaning has changed over the years, transforming in some ways from an ethical crime to a professional goal.

RELATED: Peak superhero? Not even close: How one movie genre became the guiding myth of neoliberalism

In 2006, when the first installment of the comic on which the show is based hit the stands, the mainstream concept of selling out was already on the wane. It’s not hard to see why. Artists have to buy food and pay rent, leaving little romantic appeal in the image of the starving artist. Of course, the term has a different meaning among marginalized people, where the accusation holds the sting of betraying one’s culture and people.

This brings us to A-Train (Jesse T. Usher), supposedly the fastest man on Earth, and the team’s only Black member. The attention-starved hero has been sidelined but is promised a rebrand as long as he keeps his mouth shut and does what the company tells him to do. That’s a challenge in a society where white supers arbitrarily hunt Black people and get hailed on newscasts as heroes.

Sometime around the middle of the Great Recession, selling out became the thing to do.

A-Train could do something about it, his brother points out. But the speedster shrugs. “I’m Michael Jordan. I’m not Malcolm X,” he says. Soon after, the geniuses in marketing come up with a new opportunity to raise his rating among the African American demographic.

Sometime around the middle of the Great Recession, selling out became the thing to do. It translates to commercial success, which brings with it more money and a better shot at financial survival.

In the third season of Prime Video’s adaptation of “The Boys,” Starlight is far from alone in paying dearly for selling out. Everybody’s doing it. It can’t be helped. And when activists, professors, and other intellectuals dissect how late capitalism is accelerating democracy’s slide into fascism, these stories either directly or metaphorically illustrate what they’re talking about.

Among the non-powered humans who hunted the out-of-control members of The Seven, Annie’s boyfriend Hughie (played by Jack Quaid) has traded his vigilante status to work for the Federal Bureau of Superhuman Affairs and its head Victoria Newman (Claudia Doumit ). 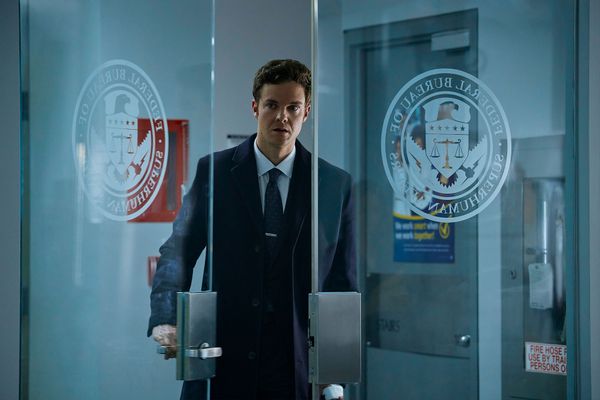 Jack Quaid in “The Boys” (Courtesy of Prime Video/Amazon Studios)

His former leader Billy Butcher (Karl Urban) and Billy’s compatriots Frenchie (Tomer Capon) and Kimiko (Karen Fukuhara) contract with him to do the Bureau’s dirty work. Their remaining member, Marvin Milk (Laz Alonso), left the team to restore his relationship with his now-ex-wife and daughter.

And in everybody’s lives, selling out has paid off. Hughie has a shiny apartment with a view, which is many steps up from hiding in a rat hole. Butcher and the rest are headquartered in New York’s Flatiron Building, an architectural icon. Their work through the Bureau of Superhuman Affairs has resulted in a 60% decline in collateral damage.

Such evidence of progress and getting ahead tends to be temporary at best, and mainly illusory. And in the rare case where someone comes out as a winner, lots of others must lose. The price for The Deep rejoining The Seven, for example, is that he must eat a friend to prove his loyalty. A-Train is cast to fit the illusion of Vought caring about Black lives without doing anything to rock the boat.

Hughie’s relative gullibility is a constant source of entertainment to Butcher, so when the junior member of the vigilante team discovers his boss is just like the out-of-control supers they purport to hunt, Butcher works him over with punchlines.

That means Victoria and the Bureau are arms of Vought, too.

Series creator and showrunner Eric Kripke doesn’t make the sellout theme as front-facing in these new episodes as he and the writers do with the second season’s take on the rising tide of fascism, fed by the introduction of Stormfront (Aya Cash), a Nazi who hid her white supremacy behind a cloak of girl boss feminism.

“The Boys” is still a superhero show flipped underbelly up, meaning its dedication to wild fights ending in cartoonish gore still figures prominently. So does Butcher’s obsession with satisfying his vendetta against Homelander, which has placed him on a quest to find yesterday’s superman Soldier Boy (Jensen Ackles), presumed by most to be long dead.

Of course, Butcher is selling out too, compromising his morals to secretly juice up on a temporary Compound V to get an invulnerability boost, becoming the thing he hates.

One wonders if Darick Robertson and Garth Ennis, the original comic book creators of “The Boys” imagined society would veer so close to realizing the twisted hero-worship parody they fashioned. They probably wouldn’t have predicted that a corporation that shares Vought’s goal of global saturation would make their tale into a TV show, either.

You don’t even have to watch this show to participate in the big sellout.

That’s always been the cynical kicker within this show’s gleeful joke. It is a great show, one that counts a former president among its fans and plays its part to give us comfort and convenience through an hour of power fantasy escapism. It’s also pointing out how easily we trade away our agency and our rights in exchange for entertainment.

You don’t even have to watch this show to participate in the big sellout, either. All you have to do is be a fan of a brand, or a star, instead of valuing the ways that one person being denied justice could stand to impact all of us.

Want Amanda Marcotte on politics? Subscribe to her Standing Room Only newsletter.

Annie, A-Train, and Hughie have gotten as far as they have by being blind, whether by choice or unintentionally. Butcher’s trading his principles, and his body, for a short-term win, and damn whatever it costs him over time.

“The Boys” still presents a fantasy version of America where people can fly, rip metal apart with their bare hands and make people’s heads explode using psychic powers – and it does that very well. But if this season makes us feel more squeamish, that may be for reasons other than the exploding victims, broken bones, and gross-out scenarios. (A bit involving this world’s Ant-Man doppelganger leaping inside another man’s urethra is . . . inspired.)

Perhaps it’s because the show has gotten very good at reminding us that our nation’s reality is not so far removed from the one it depicts: A world fueled by the average person’s willingness to bankrupt its values ​​in exchange for tasty snacks and a good time.

The first three episodes of “The Boys” are currently streaming on Prime Video. New episode debut on Fridays.