Mate series is one of the best smartphone lineups in the Huawei family. The company has implemented the models with attractive and thoughtful features that not only help the users in their daily needs but also make them astonished at the same time. However, the best feature award for the Huawei Mate smartphone goes to the knuckle screenshot.

The juries who have selected the knuckle screenshot feature as the most popular one are the general consumers around the world. As per their choice, the mentioned trait is one of the simple yet modish features that the company has imposed on its devices.

Huawei is celebrating 10 successful years of the Mate line-up. And with every new day, the company is initiating some other activity including the Mate handsets. In the latest section, Huawei brought the Mate ten-year innovation experience review to its users to know what has attracted the most in the Mate family.

And as of today, the company officially announced the results of the review, showcasing the screenshot ranking at the top of Huawei Mate smartphone features. The respective function has gained 21,678 votes out of 159,744 total votes.

Do you know what is Knuckle Screenshot?

You might be knowing different ways of capturing a screenshot on Huawei phones. Either from touch gestures or the button systems. But have you ever heard of the knuckle screenshot? Well, that’s what Huawei is known for! New and attractive functions that bind the view of the users.

Consequently, the knuckle screenshot lets you knock on the screen gently and click a screenshot. As the name reflects, when you will tap or sketch on the screen through your knuckles (firmly), the device will automatically capture a snapshot of the content.

The feature uses the FingerSense program and made a debut with the P10 series. Besides, it can support the taking of screenshots in various methods. For instance, knuckle double-click screenshots, two-finger double-tap screen recordings, knuckle S-shaped scrolling screenshots, area screenshots, and linear split screens.

Apart from the knuckle screenshot, other features like wireless reverse charging, super fast charging, and AI-smart payment also gained a huge amount of votes. Yet, none of them was able to overtake the immersive screenshot function. 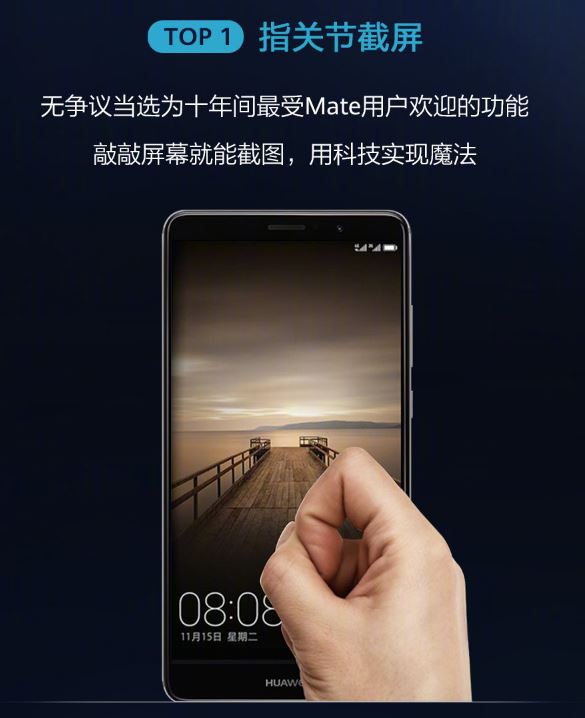