Huawei Mate 50 series will launch on September 6 and alongside this launch event, the company is also celebrating the 10th anniversary of the Mate series. As we now enter the 10th year of this launch carnival, Huawei Consumer BG CEO – Yu Chengdong has blessed us with a new picture of the entire Mate series devices launched so far.

That’s not it, Yu also expressed how the Huawei Mate series has evolved throughout the years and remained optimistic about the next decade that is yet to come and filled with lots of new technologies.

Below you can check all of the Mate series devices along with their launch year and launch theme.

In January 2013, Huawei unveiled the first Mate (1) phone for the consumer with the theme of “My Pocket Cinema”. The phone offers a big screen and runs Android software.

In March 2014, Huawei Mate 2 made its debut with the theme tag “Thinking is too far”

In late 2014, Huawei launched another mate device – Mate 7, which corresponds with the theme of “Jazz Life”. Since then, Huawei started to release two flagship devices in a year including a P series in the first half of the year starting with the P8 series.

In November 2015, Huawei marked the arrival of the Mate 8 with a theme of “a breakthrough in high performance and battery life”.

Huawei Mate 9 series was launched in November 2016, offering excellent design and performance with the help of a Kirin processor and a theme tag of “Progress Go Further”.

There’s one device in the middle that was introduced in early 2018, as Huawei Mate RS Porsche Design with the theme of “Salute to the Era”.

The real developments and progress have been greatly made by the successor Mate 20, also released in later half of 2018, it’s also the last Mate phone with GMS. Yet, the phone comes with a brand new matrix camera system and a lot to explore with its notch design. Don’t forget its tagline “New Heights of greatness.

September 2019 brings in the new Huawei Mate 30 series, which has a theme of “reconstructing imagination” with its new ring camera system.

In 2020, Huawei unveiled the Mate 40 series with the tagline “Let’s see the extraordinary” and a bunch of improvements in design and every aspect of the smartphone.

In September this year, we’ll meet the Huawei mate 50 series with a tag of “breakout of the dawn, meet at the peak”. Yeah, Mate 50 series holds some interesting secrets and new technologies for us, and we’ll surely be excited to see them on September 6. 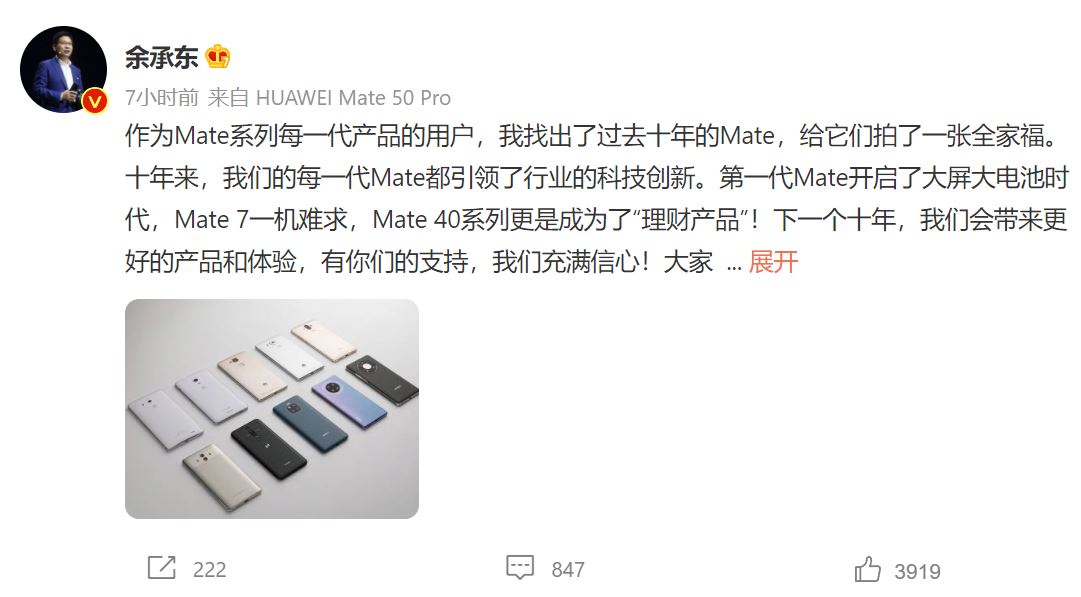